Update: Which French Political Party Would You Vote For? 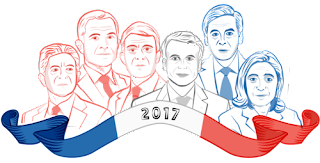 Yesterday I posted a link to my friend Arun Kapil's (excellent) blog about French politics, particularly to his translation into English of a Sciences Po questionnaire designed to see which French political party you would vote for, were you French. I promised to offer my results and thoughts about them today. Voici.
I found this test especially interesting because on more than one question -- in fact on most of them -- I strongly agreed with more than one answer, and found it very hard to decide which statement I most agreed with. For example:

1. Whether or not one is religiously observant, one must not neglect the moral values conveyed by religion.
2. One must tolerate all types of religious practices so long as they are freely consented to, even when they may be shocking to some.
3. Religious morality should be combated, as it prevents people from living and thinking freely.
4. Religion may sometimes be incompatible with personal freedom but it can, at the same time, offer answers to the profound questions of human existence.
5. The message of religion is primordial, as it helps us distinguish good from bad in our lives.

I don’t agree with (3). But (1), (4), and (5) all seem like good answers to me; and in most cases I agree with (2), especially as an American who takes religious freedom seriously -- though we come up against some very hard cases when religious practices shock majority sensibilities or are in conflict with the law or with other religious beliefs. So I eliminated (2) as “too difficult,” and went with (1).
I found that if I went back and changed my answer in just a few places to one that I thought was “almost as good, or maybe better,” it moved me from center-left to liberal-republican and then, the third time I tried, back to center. So: small change, big variance.
But I think my responses are going to be different from most American's or non-French readers', because try as I might, I can’t separate “my own political principles” from “what I might think if I were French” (as I instructed readers to do). By this point, I’m just too familiar with French problems not to have an opinion about them. So whereas I suspect most readers would have gone with an answer other than this one, which I chose:

3. To facilitate the integration of immigrants it is necessary to fight against unemployment—which hinders their integration—and to make sure that the rights of immigrants are respected in countering discrimination of which they may be victims.

I chose it strongly over the others (probably pushing me toward “center” or “center-left”) -- because I firmly believe, after seeing it and the effects of it every day, that excessively strict French labor laws keep immigrants out of the labor market and unemployed; that this consigns them to ghettoization; and this in turn makes it vastly more difficult for them to integrate. I also find this to be a form of discrimination, of which immigrants here are very much victims. The consequences of this have become a serious problem in France.
If I were taking this quiz in America, though, I’d probably answer:

4. In order for the integration of immigrants to succeed they must not suffer from discrimination but, at the same time, they should respect the values of the host country.

I don’t think immigrants to America suffer from a want of entry-level jobs, or that the lack thereof is the source of huge social problems. I think statement (4) best describes what we might call the “basic American integration compact.”
(Also, I’m pretty sure I skewed things by giving myself the vote. Why not? I pay taxes, I’m integrated, I obey the laws, and I’m very much affected by what French politicians decide — why shouldn’t I be represented? But I reckon I’m the only American respondent who’d let me vote, though, at least, the only one who doesn't live here. That pushed me to the left on one version.)
Now that everyone's had the chance to take the test without being overly influenced by Arun's interpretation or mine (and if you haven't, go take it, first), here's Arun’s interpretation.  I think his observations are pretty much right on, especially the parts I’ve marked in bold:

One day in 2005 or thereabouts I was watching a political talk show and in which one of the guests was a well-known American journalist in town and regular on TV and radio (he had carved out a niche for himself as a great explainer of America to the French, but also as an observer of the latter, writing humoristically about the natives and their us et coutumes with his œil américain; his books sold well, which I found mystifying). During the show this journalist asserted that the French equivalent of the US Democratic party was the UDF—the centrist party led by François Bayrou and that had long been allied with the right (and never with the Socialists)—and that there was no significant electoral force in American politics on the left side of the political spectrum such as it existed in France. Hearing this almost caused me to fall out of my chair. To equate the US Democratic party with the UDF betrayed an ignorance of the latter—a party with Christian Democratic roots, a moderately conservative sensibility, and mainly provincial bourgeois voting base—and of the former as well. There was, moreover, the implication here that mainstream American Democrats in France would gravitate toward the UDF—which, despite its claimed centrism, was marked in the public mind as moderate right—over the dominant party of the moderate left, the Socialists. It had, in fact, long been my hypothesis that American Democratic party voters would find their natural political home in France to be the Parti Socialiste—and with left-wing Dems leaning toward the left-wing of the PS (now Jean-Luc Mélenchon’s Parti de Gauche) or Jean-Pierre Chevènement’s MRC—, and with Republicans naturally identifying with the UMP. In other words, that the American liberal-conservative/Democrat-Republican cleavage would find a near precise correspondence in France with the left and right. Now with the Politest, I could test the hypothesis.
So I translated the questionnaire into English and e-mailed it, along with the Politest link, to friends and relatives in the US, who could follow the translation while taking the test, and requested that they report the results back to me. My hypothesis was confirmed, based on the fifteen or so responses I received. Liberals were identified primarily with the PS or center-left PRG, those more to the left with the “gauche du PS” or MRC, and the Republican or two in my sample with the UMP (a couple of the results were unexpected, e.g. a relative of the older generation and from the American heartland, a yellow dog Democrat but with unprogressive views on several issues—her kids accuse her of being a secret Republican—, turned out to be closest to Chevènement’s MRC, followed by the Communist party! provoking both stupefaction and hilarity).
A few qualifications, though. For several of my liberal, Democrat-voting friends, the test result specified that though they were closest to the PS no party entirely reflected their views. I interpreted this as signifying some political-cultural differences between Americans and the French, notably with the cult of the state and Jacobin reflexes one finds on the French left, which even big government sympathizing American liberals do not entirely relate to. Mainstream American Democrats are more libéral—in the classical economic sense—than mainstream French Socialists (though the gap here has narrowed over time; and there have long been leading social-libéral PS politicians—e.g. Michel Rocard, DSK—with whom American liberals could identify). At a dinner-debate in March 2007 of the Paris chapter of Democrats Abroad—on the subject of the French presidential campaign, and in which I was one of the speakers—the question was posed to the 80 or so present—a certain number of whom had acquired French citizenship—as to which candidate they were supporting. Ségolène Royal came in first but a significant number of hands went up for Sarkozy and François Bayrou (Democrats Abroad members, most of whom are high-income professionals, tend toward the center, particularly on the economy; and it should be noted that a certain number of PS voters in the 2007 election defected to Bayrou, and even Sarkozy). I could understand the appeal of Sarkozy at the time for Americans, in view of his atypical profile and pro-Americanism. In this regard, I noted in the 1990s through the 2002 election the attraction of some American Democrats in France—including myself, to a certain extent—to Alain Madelin, a solidly right-wing politician but whose economic libéralisme—the alpha and omega of his discourse—, pro-Americanism, and sunny optimism were a breath of fresh air in this country. But the interest here was with the personalities of Sarkozy and Madelin, not with their parties or larger political families (e.g. I would be most surprised if US Democrats in France who liked Sarkozy also feel the same way about Jean-François Copé, let alone the UMP as a whole).
A new hypothesis: with the mutation of the residue of François Bayrou’s erstwhile UDF into the MoDem—which loudly proclaims its centrism, is not allied with the UMP (and is shed of the ex-UDF’s right-leaning elements), and has made local electoral deals with the PS—, it is possible that some moderate US Democrats may identify with this over the Socialists (and particularly as the incriminating UDF label is now gone). Personal disclosure: in the 2007 legislative election, I voted for the MoDem candidate in the first round in my safe UMP constituency (a throw-away vote, and mainly because I was more impressed with the candidate personality-wise than the PS one). 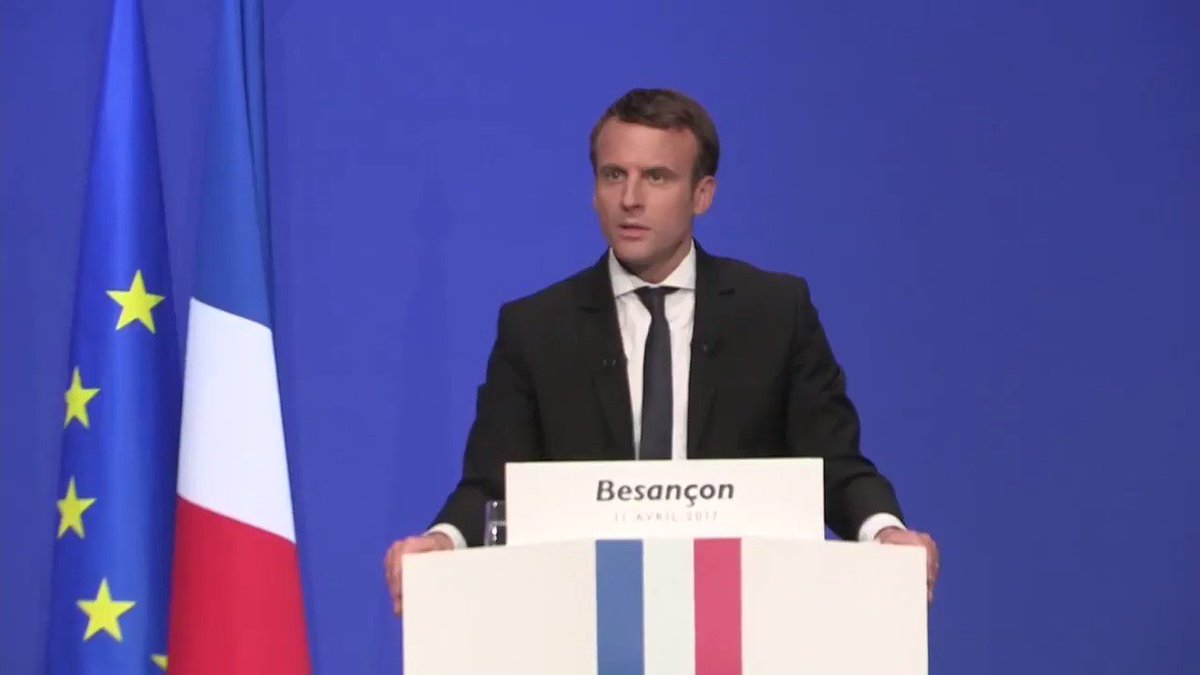 He reminded me (just a little) of Thatcher there. (I apologize for the lack of subtitles on the clip; if any of you are studying French and would like to translate it as a homework exercise, please do; I'll correct it for you -- if necessary -- and post it. Otherwise, I'll translate it later this week.)
Thoughts?

(By the way, if the mechanics of French elections confuse you, you're not alone. I've written a simple explanation of how they work, here.)

A request: If you're interested in Europe in the Age of Trump and Trumpism, would you please consider contributing to my wholly crowd-sourced book about the New Europe? Every contribution is greatly appreciated -- more than you can possibly know.